The Simplest Way to Create a Kent State Legacy? Designate Us! 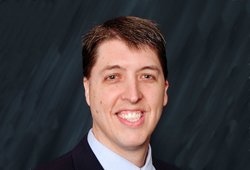 You're never too young to begin estate planning.

For 40-year-old Chad Peterson, '93, that plan includes a charitable contribution for his alma mater, Kent State - one that's simple to arrange, and doesn't cost him any valuable retirement assets today.

Gifts by beneficiary designation are one of the easiest ways to create a legacy at Kent State. How easy? All you need to do is list the university on the beneficiary form for your retirement, investment or insurance account. Upon your death, Kent State receives the funds from that account - typically faster than if you named the university in your will and the assets had to work their way through the probate process.

And you can designate each account to be divided as you wish - leaving a portion to Kent State, while designating the remainder to your loved ones, for example.

That's what Peterson, the Kent State alumnus, has done. He's designated 30 percent of his individual retirement account to benefit students in the College of Business Administration, where he earned his marketing degree.

"First of all, it's a value thing that I believe very strongly - to give back to the university because it's the thing that got me started on my career path," the Vancouver, Wash.-based financial planner says. "Also, from a charitable giving standpoint, I've been educated that it's easiest through the estate-planning process."

For some that's through a will. But there's an even simpler route, which Peterson recommends to his clients.

"I prefer to have people directly name the charity of their choice as a partial beneficiary of their retirement plans," he explains. "There are no taxes owed by the nonprofit, as opposed to their heirs. And it's very easy, using the beneficiary form, to change as their needs change over their lifetime."

The married father of two explains that he's not too young to be thinking about these things.

"I wish that I could say that all of the clients I've worked with who have passed away have been in their 70s or 80s or 90s, but I can't," he says. "Sound financial planning means doing things I can control now, rather than waiting for some future unexpected event - then I've lost control over the decision-making process."

And if you die without leaving a will or properly filling out the beneficiary form, the state makes those decisions. For Peterson, the decision to include Kent State in his plans was an easy one.

"I want to support the university. I take a lot of pride in going to Kent State, and it's important that we're all giving back," he says. "Bottom line, if it's something I'm preaching to my clients, I should practice it myself."