Jack and Dora Tippens Give Back 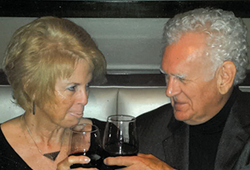 
On a cold January evening in 1962, Kent State University student Jack Tippens and a friend dressed up and went to a mixer at Wills Gym on campus. Jack loved to dance. Looking around, Jack noticed three girls at the bandstand, and decided to ask one of them to dance. He tapped the middle girl on the shoulder.

"She turned around and when I caught my breath, I said, 'Would you like to dance?' We danced every single dance that night," recalls Jack.

The girl's name was Dora Chambers. 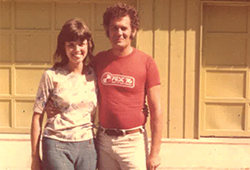 "That night, they had a limbo contest," she says. "Jack is very competitive. I held his suit jacket while he limboed. The bar went as low as the height of a standard Coke bottle. Somehow he got under that and won the contest. I thought to myself, 'who is this person?'"

That dance was one of many that Jack and Dora attended at Kent State over the years.

"They used to hold dances on Friday afternoons at the Student Center," Jack says. "Since neither of us had any money, afterwards we just walked around campus and talked. She was a freshman and I was a sophomore." 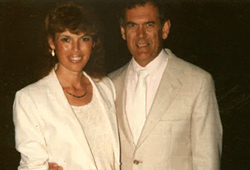 It took Jack six years to get his bachelor's degree, because he had to take a job in between years to pay for his schooling.

Jack and Dora were married while they were still in school, in September 1964. At the time, Jack had just finished six months active duty training in the Ohio Army National Guard.

"All the young men were given physicals in 1963 to begin the draft," Jack says. "Since I was a student, and getting married, I didn't want to have to go away for two or three years, so I joined the Guard." 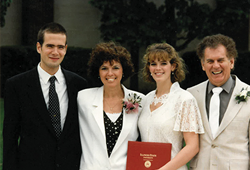 Jack had some art classes in the former ROTC barracks - wooden buildings that were behind Van Duesen Hall.

"I built a sculpture in a room in the barracks as part of a final assignment for senior sculpture class," says Jack. "I would sneak into the room, and in order to have time to work on my project late at night, I would leave a window open. Then I'd come back at midnight and climb in through the window to work on it. I had collected metal straps from campus construction sites and would shove them through the window to use on my project. Somehow I managed to avoid the campus police!" And he won first place for his project. 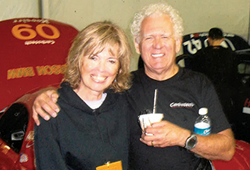 They went on to become art museum curator and high school teacher, then community college professors in Cleveland and in the suburbs surrounding Chicago. Jack retired in 1999 after teaching studio art and art history for 30 years. Dora retired in 2002 after teaching composition, literature, and speech, and consulting with corporate clients in international/intercultural business communications.

In the interim, they had a son, Bryan, now 48, and a daughter Kirsten, now 46, and five grandchildren. The Tippens celebrated their 50th wedding anniversary in 2014 with a family Disney cruise.

Jack and Dora started giving to Kent State in 1966. They gave small gifts, since they didn't have much, and had to work hard to cover the cost of their educations.

"We both appreciated what school meant," says Jack. "It was more dear to us than to some people who might have gotten through a little more easily."

Each year as they earned more, they would increase their giving a little bit.

"It took a few decades to become a significant amount," Dora says. "We both wanted to do something for the university because we grew our hearts there. And as teachers, we knew what college meant. We knew that some of our own students were having a hard time financially."

"We wanted to do something now so that we could see results now," added Jack. 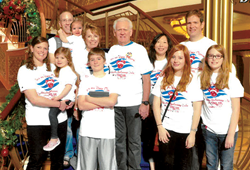 Family Disney cruise, celebrating Jack and Dora's 50th wedding anniversary in 2014. Pictured are Jack and Dora, their children and grandchildren.

Jack and Dora used their IRAs to make several gifts to Kent State.

"At 70½, we had to take money out of our IRAs by law," said Jack. "We found out that we could contribute some or all of the Required Minimum Distribution (RMD) directly to the university. It was never considered income, and we didn't have to pay taxes on it."

"This allowed us to give more because we didn't have to deduct taxes from the donation," said Dora. "It's an even better way to give now with the new tax laws-- its effortless giving."

The Tippens are surprised that more people don't donate from their IRAs.

"Not a lot of people know about it, apparently," Jack says. "It makes a lot of sense for those of us who are over 70 and are having to pull money out of our IRAs by mandate. What better way to use RMDs than to enhance the opportunity for some young people to go to college? And at the same time cut down any tax burden."

Since both were professors, Jack and Dora believe in working with young people, and that education is key. 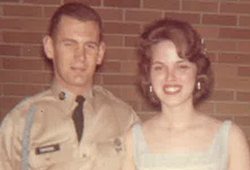 "It doesn't begin with us and it doesn't end with us," said Dora. "We're at a point where 70 percent of jobs require education and training beyond high school. The need is there, it's real, and it's desperation for some people. We're so pleased that we can do our part to help them."

If, like Jack and Dora Tippens, you're over age 70½ and would like to help fund the future for a student using some of your IRA, contact the Center for Gift and Estate Planning at 330-672-1000 or giftplan@kent.edu.