From China to Kent State to Success 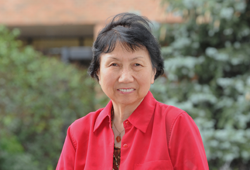 Childhood opportunities provide professor reason to give back

Emeritus Professor of Chemistry Debbie Fu-Tai Tuan had been giving to the Kent State Annual Fund for 23 years when she approached the university's Center for Gift and Estate Planning about leaving a lasting legacy: an endowment to support Honors College students majoring in chemistry.

Her purpose was two-fold: first, to help Kent State attract the best and brightest students to the department. And second, to provide opportunities to talented scholars who might not otherwise have the chance to get an education.

It was an interest born from more than three decades as a teacher and scientist at the university. But it also came from a deeply personal experience: the events of her childhood, more than 60 years before, when two brutal wars tore apart her birth country and sent her family fleeing from its home forever.

Debbie Fu-Tai Tuan was just 7 years old when the invading Japanese army forced her family to depart its home in Nanjing and travel to Chongqing, in Sichuan Province, China.

Eight difficult years later, in 1945, the end of World War II allowed the family to return home. But within four years, they were uprooted again - driven off the mainland to Taiwan by the victorious Communists in the Chinese Civil War.

At school, she never had new text books, so her mother would borrow them from wealthier classmates and write the new version's updates into her used ones.

Because of the upheaval, for much of her childhood Tuan felt as if she didn't belong.

"When we got to Sichuan, we were outsiders," she says. "... They called us 'Down-River People,'" a derogatory reference.

In Taiwan, the difference was even more pronounced: She spoke a different dialect than her peers, who called the recent arrivals "Out-of-Staters."

"It made me feel like an outsider, but it also made me understand different people," she says.

The experiences taught Tuan to be more open-minded, she says. They also taught her the need to study hard and be self-reliant.

Those values served her well - first at National Taiwan University, where she earned a bachelor's and master's degree in chemistry. But after graduation, she saw that many of her peers were finding a better life by coming to the United States. America presented an opportunity to support her family - but she needed a full scholarship to succeed.

On her first attempt, she was awarded tuition support, which wouldn't have been enough to survive. Her second pass, however, resulted in success when Yale offered her a full ride as a graduate assistant. Within three years, she completed another master's degree and a doctorate.

And in 1965, after post-doctorate periods at Yale and the University of Wisconsin, she arrived at Kent State, a place she would finally call home for the next 31 years.

As a woman in science in the 1960s, Tuan felt as foreign as when her family was forced to move to Taiwan in her youth. At Kent State, she was the only female faculty member in the Chemistry Department. Ironically, women had better opportunities back in Taiwan, she says.

But Tuan earned tenure, along with promotions to associate professor, then professor. Along the way, she carried on research as a visiting scholar at Harvard, Stanford Research Institute, Cornell and Ohio State before her retirement in 1996.

Four years later, Tuan came to the Center for Gift and Estate Planning at Kent State, to discuss her interests in philanthropy. Resources were limited, but she wanted to create a scholarship that would allow her to pass on the opportunities made possible for her as a student.

With the Center's help, Tuan examined her goals and the resources she had available to achieve her objectives.

The plan used charitable gift annuities to fund the Honors College scholarship. And having fully funded that scholarship a few years ago, Tuan then aimed her sights on supporting a chemistry graduate assistantship.

Tuan's connection to the university has continued long into her retirement. She still returns to campus as an emeritus professor - it's a product of her childhood lessons of working hard and a habit she can't change, she says.

And at age 78, she's still learning. She audits classes on the Kent Campus to broaden her knowledge beyond the intense science coursework she took earlier in life.

"I try to attend enjoyable courses. I think I audited quite a lot of art history courses," she says, laughing. "I think I'm getting some sort of auditing master's degree in art history!"