Remembering Loved Ones Through the Gift of Education 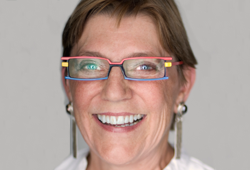 As Karen Novotny Tischer tells the story, Kent State is responsible for her existence.

"As far as I can remember, my dad went to school," Karen says. "My mother used to laugh. She'd say, 'You know, your first-grade teacher would ask what does your father do? And I would say he went to school.' I didn't realize he was a professor."

Elmer built the school from just a handful of instructors to one with a number of departments. Along the way, his career as an artist flourished, and until his retirement, he painted the official portraits of every Kent State university president.

"I used to sit on the top of the steps into his studio, very quietly, and I could watch Dad paint," his daughter says. "I have a very warm feeling about certain smells, like linseed oil and turpentine. Those are the smells of an artist who paints in oils."

In addition to a childhood as a model in her father's drawing classes, Karen attended the Kent State University School as a high school student, and then graduated in 1964 from the College of Arts and Sciences and in 1965 from the College of Education, Health and Human Services. Her lifetime of education continued into her career - first as a public school teacher, then as an instructor for IBM and later through her own consulting business.

She's married to her college sweetheart, Thomas O'Donnell, '65, with whom she rekindled a romance after 35 years apart. And like her father, Karen is an artist; she specializes in architectural photography, and currently is working on a collaborative project in Cuba.

To honor her parents, she's named Kent State as the beneficiary of her trust, which will add to an existing endowed scholarship named in her parents' memory.

"They were just great people," Karen says. "Mom wanted to start the scholarship when Dad died. And when Mom died, I added her name because he couldn't have done it without her."

The fund will benefit students in the School of Art.

"My parents are still a part of my life. I have a double-portrait of them in my studio, so their eyes are on me," she says. "I think this scholarship would please them."