A Will to Succeed 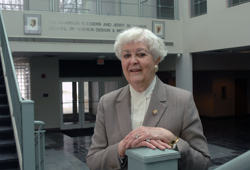 It was a mild summer evening late in July 2006, but the student callers in the Kent State Phone Center weren't enjoying a vacation like many of their peers. In cubicle after cubicle, students dialed alumni from across the country, providing school updates and raising vital funds for the university Annual Fund.

Sophomore Ellen Scott, a human development and family studies major who had been employed in the center for about a year, was calling a different list than her co-workers. As the line rang for Vivian Mills, a 1967 graduate of the College of Education, Scott was about to have the kind of conversation that shakes off all of the busy signals and answering machines, the kind that "turns your night around," she says.

The two formed an immediate connection, she says. "It was one of those phone calls when you're done that you're smiling."

Mills renewed her Annual Fund pledge, something she has done for more than 30 years. And at the end of the conversation, Scott asked an intriguing question: Have you ever considered putting Kent State in your will?

Oh, Mills replied, I've already done that. But what she did next only added to her generosity.

More and more planned gifts are becoming known through increased efforts to promote the benefits of remembering Kent State in wills, but the university still receives some bequest gifts that were not previously disclosed, says Mindy Aleman, executive director for gift and estate planning. While the school is grateful for its donors' contributions no matter how they arrive, not knowing about a potential bequest can complicate matters.

Sometimes the language used in the will is incorrect, making the transfer more difficult. Other times, the university simply doesn't know how the donor wished the gift to be used.

So in 2005, the Center for Gift and Estate Planning launched the Request-a-Bequest program through the university's Phone Center. Student callers talk to long-term Annual Fund donors in the hopes of uncovering an existing bequest or inspiring a new one.

"When donors tell us about their future bequest intentions, it not only helps us make a smooth transition," Aleman says, "but it allows us to show our gratitude during their lifetime and ensure the gift will have the maximum impact toward their vision."

Since the program's inception, student calls have resulted in more than $4 million in bequests and gifts, and more than 550 alumni have indicated they will consider including the university in their wills.

Vivian Mills is one of those alumni. The Stow resident has devoted much of her adult life to education. After both of her children were in kindergarten, she returned to school at Kent State and receiving her degree after eight years of part-time study.

Following graduation, she taught sixth grade for more than two decades at Echo Hills School - a great school, she says. "No one ever transferred out of Echo Hills; everybody transferred in."

"When I was teaching, I had several exceptionally good students who talked about - well, they had family problems," she says. Mills helped them achieve their dreams of going to college, and she still keeps in contact with some of them.

As she began considering her will, she says, "it was time to start thinking of ways to help other children."

Assisting students get a college education, she says, seemed like a worthy cause.

A gift planner followed up on Ellen Scott's Request-a-Bequest call to thank Mills and clarify her wishes for the future gift. Through subsequent conversations, Mills decided to direct her bequest toward scholarships in two areas: education and fashion, another of her lifelong interests.

But the member of the Friends of Fashion and frequent visitor to the Kent State University Museum decided to take a step further and endow the scholarship through a current gift. That fund will begin benefiting students next year and will grow with her bequest.

"Vivian's generosity began long before Ellen ever contacted her through the Phone Center," Aleman says. "But what she revealed in that one call has led to so much more, and now her gifts will provide for many students today and long past her lifetime. When donors advise us of their bequest intentions, they can ensure the school is prepared to help their future gift leave the greatest legacy."

To speak with the Center for Gift and Estate Planning about your bequest plans, please call 330-672-1000 or e-mail jyoun101@kent.edu.