Ed and Peg Hall—All Roads Lead to A Giving Legacy 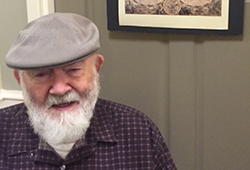 Edward J. Hall loves maps. How they look. What they tell us about our immediate surroundings as well as our place on the planet, past and present.

Ed is a retired map librarian, who spent over 30 years amassing the second largest collection of maps in the country, housed here at Kent State University.

Ed is also a philanthropist who wants to ensure that future generations of Kent State students know how to read and understand maps (rather than just following the voice on their GPS). "There's a real need for acquainting people with their cities," he says. Inspired by late faculty colleagues Jim Rinier (geology) and Art Herrick (biology) who designated Kent State in their estate plans, Ed and his wife, Peg, have funded a gift annuity, which at maturity will benefit the Map Library in the Kent State University Libraries. "We're grateful that Kent State provided me with a livelihood for 30 years, and also paid for our daughter's graduate school education," says Ed. "A gift annuity also lets us do something for the university while getting something back." 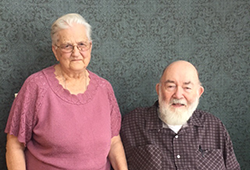 Native New Englanders, Ed and Peg met while attending the University of Vermont, from which Ed earned undergraduate and graduate degrees in history and geography and Peg earned an education degree. Ed also later attained a Master's in Medical Librarianship from the State University of New York in Albany.

Ed owes his love of maps to two former deans of University Libraries, Jordan Hodgkins and Hy Kritzer, as well as President Lyndon Johnson. He was teaching at a community college in Massachusetts when President Johnson announced a new program for teachers in urban studies and geography. Ed was selected as one of only 30 teachers in the country to bring these subjects into America's classrooms. The curriculum also gave him a sense of how cities develop. "I can go anywhere in the U.S., check out a map and pinpoint city centers, retail sectors, etc., even before driving around."

In 1973, Ed came to Kent State to interview for a faculty position in geography, but was wooed away to become a map librarian where he could serve many departments as well as the surrounding community. His love of maps and a keen skill for trading placed him in one of the most unusual positions at the university: caring for its huge map collection, and trading duplicate maps with other cities and libraries for ones that complimented the collection. During his tenure at Kent State, Ed split his time between University Libraries and the Map Library; he now serves on the University Libraries Advisory Council.

As to the lasting legacy he is leaving for future generations to explore and enjoy, Ed recently noted, "I'm so pleased to support Kent State and the Map Library — it's one of Kent State's true gems. And I'm proud to have been a part of it for so many years."

To learn more about how a gift annuity can pay you now and benefit Kent State in the future, call us at 330-672-1000 or email the Center for Gift and Estate Planning at giftplan@kent.edu.